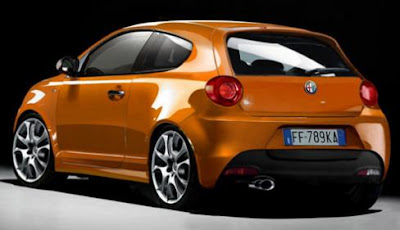 Alfa has impressed us wildly with their 8C Competizione supercar and now all enthusiasts’ eyes are on the MiTo, a name just confirmed to us by our contacts deep inside the Turin offices. The Mini and future Audi A1 (and next Volkswagen Polo sharing with the A1) ought to watch their backs for this speeding and stunning little Italian. Alfa is making it no secret that the priorities for the MiTo are to get uttered in the same breath with Mini as a B-segment leader worldwide, and then to spoil the launch party later this year for the A1/Polo.
Sources also confirm to us that development on the MiTo has been maniacally painstaking in order to arrive in exactly the form Alfa would like in order to make the biggest impact right away. The key words in Turin have been comfort, performance, and sophistication. That means being seen as premium and image-conscious with the hippest car-buying crowd.MiTo is built on the same chassis used by Fiat’s Grande Punto and the GM’s Opel/Vauxhall Corsa, a chassis that was developed with a ton of cash during the brief marriage between Fiat and General Motors. It is reported that this chassis can give as good as it takes and the Opel Corsa OPC at 189 horsepower and 170 pound-feet of torque (197 pound-feet overboost), or the Grande Punto Abarth SS at 178 horsepower and 201 pound-feet of torque from the 1.4-liter turbocharged T-jet engine, are just the tip of the iceberg. Horsepower for the MiTo with a new turbocharged 1.8-liter direct-injected gas motor with variable valve timing as sophisticated as BMW’s Double Vanos is intended to begin at 180 horsepower and will eventually be made available with up to 230 horsepower.Other engines ready at launch will not be new, but will include both the scorching 1.4 turbo gas T-jet in the Grande Punto and the Abarth versions, plus a turbo 1.6 diesel. There will reportedly be no gas engine smaller than 1.4-liter, and we’d be surprised if a psyched up 2.0-liter direct-injection turbo gas T-jet and the existing 1.9-liter mJTD diesel don’t show up in the lineup a year after launch. Additional sources say that a Delta version perhaps with a 280-horsepower tune of the planned 2.0-liter would not come as any surprise.MiTo is also getting pumped up to assume an even larger role for Alfa since it has been confirmed that the successor to the 147 (also on this chassis we’ve been bandying about, but larger than the MiTo) will be offered only as a four-door hatch. This means the MiTo is destined to take on several guises, including the sinister two-door hatch you see here. Expect a four-door hatch as well for MiTo, as well as a four-door sedan, a wagon, and convertible. Though the rear suspension is the fairly unsophisticated torsion bar setup and not state-of-this-segment multi-link, the dampers as used on the Fiat Grande Punto Abarth sister car have shown us that Fiat Automobiles knows what its doing.The name MiTo is taken from the two cities that have formed the history of Alfa Romeo, Milan and Turin (“Torino” to the locals). The pleasing design as seen here, in fact, has been led by a team recently relocated back in the semi-abandoned traditional Alfa headquarters in the town of Arese northwest of Milan. Should the MiTo set the car world aflame as its smaller sibling the 500 has done, maybe that tattered factory can once again hit the full-on switch.MiTo goes on sale in late autumn of this year after it’s Paris motor show debut in September and….plans are in the works to take the MiTo truly global by bringing it to North America as a 2010 model. Pricing will be right in the ballpark with Mini.
Posted by Aldrin Montierro at 6:06 AM