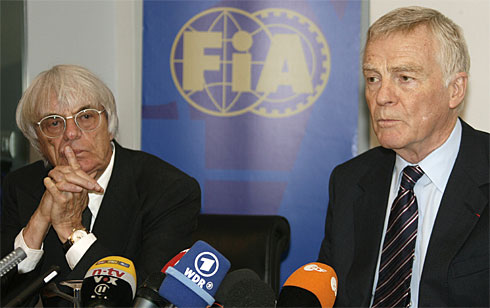 PARIS (AP) — A breakaway Formula One series was averted Wednesday when Max Mosley ceded to the rebel teams' demand that a planned budget cap be scrapped and the FIA president said he won't seek re-election.

Mosley will immediately take a back-seat role until his 16-year reign ends in October — a move that will help to end the acrimonious atmosphere that has blighted F1 in recent months.

"There will be no split. There will be one F1 championship in 2010," Mosley said at FIA's Paris headquarters.

Mosley backed down on the voluntary $65 million budget cap at the World Motorsport Council. Instead, teams were given a watered-down order to reduce costs to early 1990s levels.

But the Formula One Teams Association, which instigated the breakaway, had already implemented a series of cost-cutting measures themselves this season amid the global economic downturn, restricting on-track testing and the use of wind tunnels for aerodynamic testing.

Further efforts to create savings on engines and gearboxes in the next three years had already been announced by FOTA in May to help attract new teams. Campos Meta, Manor and Team US F1 will make their debuts next season. Additional cuts are expected to be agreed to Thursday at a FOTA meeting in Bologna, Italy.

"I am pleased FOTA's proposals have been endorsed and approved by the WMSC today," said John Howett, FOTA's vice chairman and Toyota Motorsport president. "We look forward to working with the FIA Senate to achieve a prosperous and exciting future for Formula One and its millions of fans around the world."

FOTA's members — Ferrari, McLaren, BMW Sauber, Renault, Toyota, Red Bull, Toro Rosso and Brawn GP — opposed the budget cap because it would have given those who signed up greater technical freedom than those who refused, creating a two-tier championship next season.

"We're very happy that common sense has prevailed as I always believed it would because the alternative was not good at all," said Bernie Ecclestone, F1's commercial rights holder. "Everything is in good shape."

The FIA also expects the teams to sign on to a new Concorde Agreement, the confidential commercial document governing the sport.

Last weekend's British Grand Prix had been overshadowed by the split between the FIA and FOTA members, some of whom were branded "loonies" by Mosley after their decision to form a rival series.

Mosley announced plans to sue FOTA on Friday, but backed down 48 hours later when he insisted that a deal was close.

What will help heal the rifts is the departure of the often divisive Mosley after four terms. His leadership style was criticized as too autocratic and was blamed by many of the teams for precipitating the split between FOTA and the FIA.

Even as the crisis intensified over the weekend, Mosley was still planning to run for a fifth term.

But he said Wednesday: "The teams were always ... going to get rid of me in October. Whether the person who succeeds me will be more to their taste than I am remains to be seen."

Mosley has been the president of the FIA, the international automobile federation that governs Formula One, since 1993. FIA Senate president Michel Boeri will effectively be in charge until the election.

"It is a great relief and that is going to enable me to take a step back for the summer," Mosley said. "I will be able to look at Formula One knowing it's peaceful and stable, and I will be able to stop — as was always my intention — in October of this year."

"This for me is an enormous relief," Mosley added, referring to "personal difficulties" he has faced.

His son, Alexander Mosley, was found dead at his luxury apartment May 5 after an accidental drug overdose.

Mosley successfully sued the News of the World for invasion of privacy.

The episode brought calls for Mosley's ouster as FIA president, but he won an overwhelming vote of confidence to stay on.

Posted by Aldrin Montierro at 3:21 AM