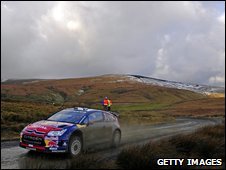 Sebastian Loeb in the Wels

The British leg of the 2009 World Rally Championship will again be held in Cardiff but ongoing money problems mean it may then leave Wales' capital.

The decision by the Welsh Assembly Government to withdraw £2.2m funding per year now seems set to be resolved with Rally Great Britain in the courts.

The Motor Sports Association stepped in to underwrite this year's costs.

The assembly government said it was still willing to discuss the future of the event with its organisers.

Cardiff has been the headquarters for Rally GB since 2000.

But the chief executive of its organisers - International Motor Sports (IMS) Ltd - Andrew Coe says that despite its many assets the financial stand-off cannot be allowed to threaten the event's world standing.

"It would be disastrous to lose the UK's round of the World Championship," Coe said.

"Wales has some of the world's best stages and forests here... and it would be a great shame to lose this event.

"So it's incumbent upon us to find a solution. It's possible it could still be in Wales but we need to keep our options open clearly.

"Unfortunately it is in the hands of lawyers and I can't really comment any more about where the situation will go."

The assembly government had an agreement to provide the rally with £2.2m annually for three years from 2008/9 as the principle backer.

However, Federation Internationale de l'Automobile - the world motor sports' governing body - has since confirmed that next year's UK leg will continue as part of the WRC calendar.

Despite that news, Rally GB and the assembly government have not been able to amicably restore their previous arrangement.

"Unfortunately we haven't been able to resolve the issues... but we're proceeding with the event anyway, the event will happen," Coe said.

"We're funding the event in effect through the governing body of UK motor sport, the Motor Sports Association, and we hope that at some point in the future the issues with the Welsh Assembly Government will be resolved.

"It's a very important event. Apart from Formula One, the World Rally Championship is the senior motor sport championship in the world.

"It would have been a very retrograde step for the UK and for Wales to have lost this event because of a commercial problem between ourselves and the Welsh Assembly Government."

The Welsh Assembly Government responded with the statement: "The legal position is that the former sponsorship agreement was terminated earlier this year by the assembly government and proceedings have been launched by IMS Ltd.

"The case will be vigorously contested by the assembly government.

"We can confirm that there have been without prejudice discussions between rally organisers, IMS, and the assembly government and that it was expected that the parties would be able to make a joint announcement of a new arrangement.

"Unfortunately, and somewhat to the assembly government's surprise, no such announcement can now be made since IMS has apparently decided that it no longer wishes the without prejudice discussions to continue.

"The Welsh Assembly Government from the outset has stressed that the door is always open for without prejudice discussions with IMS, and this remains the case."

The 2009 rally will start in Cardiff on 22 October and run until 25 October, taking in stages that encompass the forests of south and mid Wales.

Posted by Aldrin Montierro at 8:14 PM