And the Fight Begins 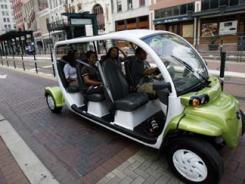 As eco-friendly or green cars hit the streets, will there be a need to re-write the laws for taxis? The fight has begun in Houston, Texas with a new company called Rev Houston. It was started in April of 2008 by Erik Ibarra and his brother. They have 3 small electric cars on the streets of downtown and midtown Houston, picking up passenger who TIP instead of paying a metered fare for short trips.

The city believes that they are breaking the law. One of the laws they believe they have broken is the fact that they do not carry a fire extinguisher. The problem there is that the vehicle does not have a single drop of combustible liquid. They also do not have a meter. They do not have a taxi cab license.

So, the city has ticketed this company 15 times so far this year at $150 to $200 per pop. It certainly is costing them to run the streets, legal or not. 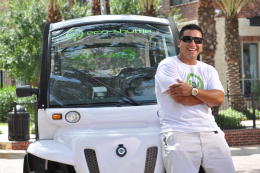 The other problem they have to deal with is the taxi companies themselves. As we all know, taxis are regulated by the city, along with the fact that taxis do not take short trips. At least that is true in Houston. I do not know if that is so in cities like Chicago or New York.

The Yellow Cab Company is yelling that it is unfair that Rev Houston is not being regulated. Perhaps if all involved looked at Rev Houston as a trolley car like in San Francisco, this could be a deal maker.

Some have come up with giving them a jitney license. The only problem with that according to Erik is that it requires him to drive a set route within the city. That is not what the company stands for.

As the green future unfolds……..

BTW, keep your eye open here at Forced Green. We will be announcing something very soon that will be of interest to all.

Posted by Aldrin Montierro at 7:39 PM