British legend's name given to final editions of the SLR supercar. Mercedes-Benz has revealed details of an exclusive SLR inspired by British motor racing legend, Stirling Moss. Only 75 will be made, each costing €750,000 (£710,810). 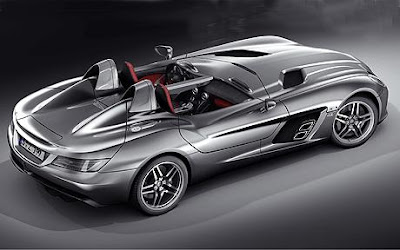 The SLR Stirling Moss is a roofless and windowless version of the Mercedes SLR McLaren Roadster, featuring a supercharged, 5,439cc V8 engine developing 650bhp. It accelerates from 0-62mph in less than 3.5 seconds and has a top speed of 217mph. Moss won many racers for Mercedes in its SLR racers during the 1950s and this tribute to his sublime skills recalls the sleek 300 SLR in which he and Denis Jenkinson famously won the 1955 Mille Miglia road race in Italy during a record-breaking drive from Brescia to Rome and back. The pair’s average speed was almost 98mph.

Like the series production SLR, the bodywork is made from carbon-fibre, with the bonnet continuing into the passenger compartment. Minuscule wind deflectors protect the two occupants from the airflow, while air scoops integrated into the bodywork behind the seats serve as roll-over bars. The SLR Stirling Moss also has a larger rear diffuser than that fitted to the SLR Coupe and Roadster.

There’s also an airbrake to aid deceleration from high speeds, which deploys during heavy braking from speeds above 75mph.

Production of the SLR Stirling Moss will begin in June 2009, when the standard SLR ceases production, and the run of 75 examples is expected to be completed by next December.
Posted by Aldrin Montierro at 3:10 AM