The Porsche Carrera Gembella Mirage GT is one cool car! 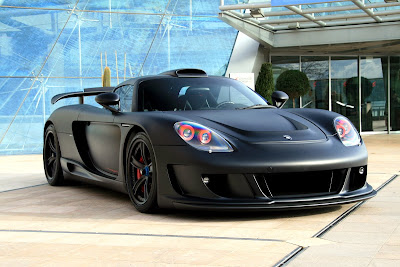 For some collectors, supercars like the Porsche Carrera GT just are not exclusive enough; after all there are 1269 other examples to steal their thunder. To cater for these enthusiasts' needs Porsche tuner Gemballa developed the Mirage GT. The German company already announced their intent to take a stab at the Carrera GT shortly after the first examples were delivered, but apparently nobody wanted to be the first to hand over their car. So for many, many months the Gemballa Mirage GT existed as an artist impression only, but more recently the much anticipated customized Carrera GTs finally appeared. 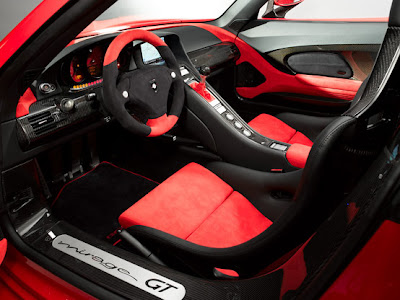 Compared to most other Gemballa modified Porsches, the Mirage GT remains remarkably close to the original Porsche mechanics, which were obviously hard to improve. The biggest change to the drivetrain is the addition of two turbochargers together with a custom stainless steel exhaust system to the V10 engine. These offer only a modest performance increase of 60 bhp and 20 Nm. Customers can no doubt increase the boost to get even more power out of the engine, but who really needs more than 700 bhp in a car as light as the Carrera GT. The modifications have cut the 0 - 60 time by a whopping 0.1 seconds to 3.8 seconds. 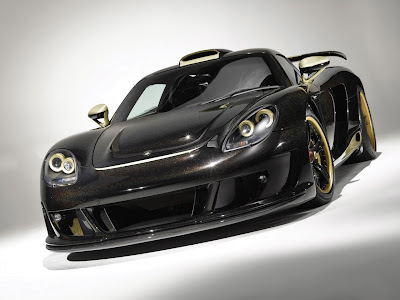 A quick glance is sufficient to distinguish the Mirage GT from the understated Carrera GT. The bumper and the nose of the Mirage GT feature a plethora of new air scoops, which can impossibly be beneficial to the car's performance. At the rear the second exhaust pipe on each side is the biggest departure from the original design. A massive rear wing is fitted complete with an integrated air brake that pops up under heavy braking. The body kit is literally topped off by a large air-scoop on the roof, which feeds air directly to the engine. As the large ducts block the view through the rear window, a small camera is fitted behind the cockpit.

Retailing for € 229,800 (not including the donor Porsche), the Mirage GT package is certainly not for the financially impaired. Then again they would be in the market for a Carrera GT either. Of course each of the 25 Mirage GTs expected to be built can be tailored to the customers needs to ensure absolute exclusivity. We have already spotted an example with very tasteful gold trim. The featured example is number 012 with a matte grey finish and yellow accents looked surprisingly well.
Posted by Aldrin Montierro at 3:05 AM