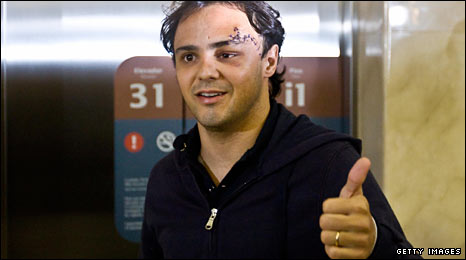 Felipe Massa has told Brazilian television he hopes to return to racing at the Brazilian Grand Prix on 18 October, Autosport magazine reports.

The Ferrari driver, 28, is recovering at home after suffering severe head injuries in a crash during qualifying for the Hungarian Grand Prix.

"I cannot wait to race again, I hope I can do the Brazilian Grand Prix," he told television channel Globo.

"But it's for the doctors to say. I have to show I can be ready."

Massa's accident, which occurred on 25 July, happened after a spring from Rubens Barrichello's Brawn GP car hit his helmet.

He was travelling at more than 160mph when the object hit him, but pressure on the brakes reduced his speed to about 60mph when he hit the tyre wall.

At first the injuries were described as "life-threatening", and there were fears for his eye sight.

Former Ferrari driver Michael Schumacher was set to come out of retirement to deputise for his friend while he recovered, before a neck injury put paid to the German's comeback plan.

Since then, Massa has made a good recovery and is now back home recuperating.

He will have to undergo a rigorous medical examination at the hands of the International Motorsport Federation (FIA) and also specialist eye check-up before he is allowed behind the wheel of an F1 car.

"I think I am going to do some laps in a go-kart beforehand," Massa added.

"Then I will go to the FIA to do the examinations and get the authorisation to come back to racing."

Posted by Aldrin Montierro at 9:46 PM