Montoya Looks Like a Contender with Another Strong Finish 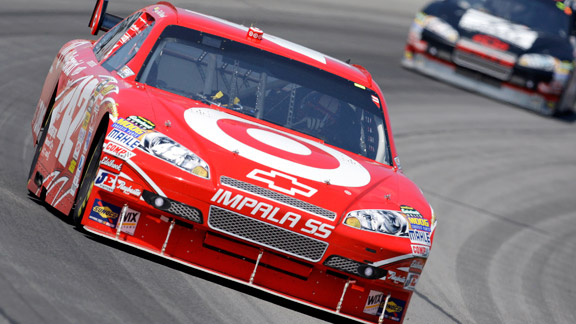 Juan Pablo Montoya boosted his Chase chances with a second-place run at Pocono.

Juan Pablo Montoya, could easily be riding a two-win streak -- on an oval and a triangular track, no less -- into his strongest suit, road racing, this week.

In other words, Montoya could be the hottest driver in NASCAR.

Had he not been bumped up the racetrack by Kasey Kahne on the final restart, Montoya might well have won the Pennsylvania 500 at Pocono on Monday. And that of course came right on top of the pit-road speeding penalty that snuffed his domination at Indianapolis on July 27.

So as it is, Montoya settled for second to Denny Hamlin at Pocono and is still looking for his first win of the season heading to Watkins Glen, N.Y., this weekend.

Yet he's exactly where he wants to be -- on a tear toward making the Chase, eighth in points, 169 ahead of the current odd man out, 13th-place Kyle Busch.

"Ifs and buts out," Montoya told reporters at Pocono, shrugging off the two near misses, "my goal is making the Chase."

Of the momentum he is building without quite the results to show for it, "I think we got fast race cars," he said of his branch of the otherwise-struggling Earnhardt-Ganassi Racing team. He and crew chief Brian Pattie are "just starting to push more the envelope with everything we do.

A shot, he meant, at the Cup, and becoming the first foreign-born driver ever to win it.

Going to the Glen this weekend certainly doesn't hurt the playoff chances of the former Formula One star from Colombia.

"I know we can probably win the race," he said, "but if we can get a top-5 out of there, the points for the Chase would be huge."

At Pocono, Montoya and Kahne started in the second row of the final double-file restart, with Hamlin sixth. But Hamlin shot to second, and set sail after then-leader Clint Bowyer, after Kahne was pushed into Montoya going into the corner, sending Montoya's car skating up the track.

"It's good Juan Pablo is one of the best drivers, or he would have been wrecked," said Kahne, who went to Montoya to apologize afterward.

"I get pushed on restarts because my car isn't as fast," Kahne explained. "So I got pushed on it, and I missed the corner and drilled him. Most guys would have wrecked right there, but the 42 kept going."

He didn't win, but he didn't wreck, and he's well on his way to the Chase.

Posted by Aldrin Montierro at 1:32 AM