Believe anything Hollywood says and you’ll already be thinking all the cool coppers drive around in Ferraris – they certainly do in Magnum, Miami Vice and Bad Boys 2. But back in the ‘60s the Italian police drove one for real. 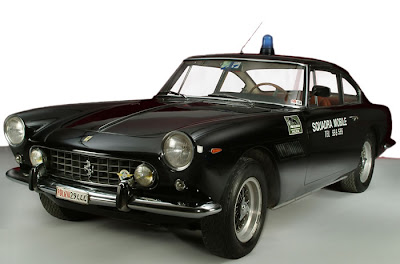 The lucky driver’s name was Marshal Armando Spatafora, something of a legend in Rome it seems, and his car was a 250 GTE. Together, they patrolled the streets of Rome for nearly a decade, hunting down serious criminals in the kind of heroic chases Hollywood directors would kill for. 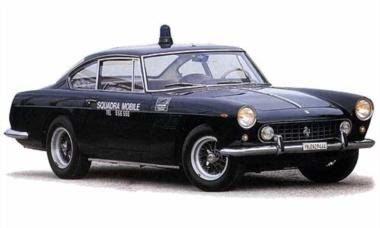 For its day, the car was seriously quick, with a 240bhp engine that could sling-shot it speedily round the tight Roman streets. As you’d expect, no car of the day stood a chance, especially as the GTE shared its roots with the 250 GTO, one of Ferrari’s finest supercars and racers. The 250 GTE was also the first mass-produced four-seat Ferrari, so there was actually a bit of space to stick any arrestees. But it looked so damn cool you’d probably want to commit some crime just to see it in action. These days it's as rare as a straight politician but the actual car used still survives in a museum of police cars in Rome.
Posted by Aldrin Montierro at 1:46 AM