From the country that has the world’s greatest concentration of supercar manufacturers comes the world’s fastest cop car. 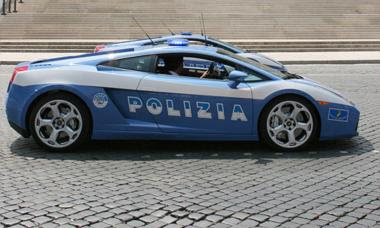 Yes, the lucky Italian cops have a Lamborghini Gallardo at their disposal, a genuine police car used by the Italian Carabinieri to patrol the Salerno-Reggio Calabria highway outside Rome. Prime hunting ground indeed, because its 5.0-litre V10 will grant it 193mph flat out and a tarmac-ruining 0-60mph time of around four seconds. But it isn’t just a patrol car for chasing wrung-out Fiats, Alfa Romeos and the occasional Ferrari. 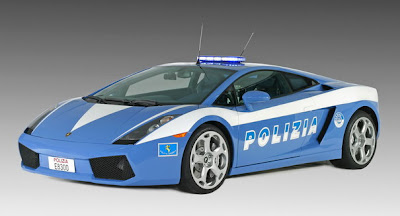 The Police-liveried Gallardo also doubles as a super-fast response car, with the ability to be the first on the scene of a serious accident. It carries life saving medical equipment such as a defibrillator to revive car crash victims, and is used as a high-speed shuttle to transport organs between hospitals. Best of all is that with four-wheel-drive sending all 500 horses into the road, the Gallardo patrol car can be used all year round in all weathers.
Posted by Aldrin Montierro at 1:42 AM