The Hummer H2 is the apotheosis of America's love affair with the SUV. There have been bigger (barely), more expensive beasts built, but none have been as in-your-face, none as erect a giant rolling middle finger, and few feature worse fuel consumption (single-digit fuel mileage is often reported by users). 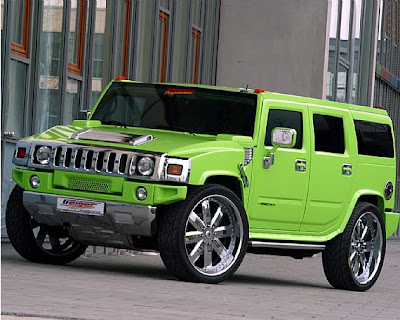 At more than 3 tons, it weighs as much as two small cars combined which, ironically, once qualified its owners for a $10K tax break. It made Time magazine's list of 50 Worst Cars of All Time and stands as one of the great mobile altars to conspicuous consumption. It was ultimately public reaction to this sturdily assembled pile of pig iron that broke the back of the mega-SUV trend; good, normal Americans who like their cars big and their Hungry Man breakfasts even bigger decided that maybe the H2 is a bit much; fuel costs and common sense pushed the public toward the cultural adoption of the now ubiquitous CUV.
Posted by Aldrin Montierro at 2:40 AM